Please Like Us On Facebook At
There Is Life After Drugs-
How Bad Do You Want It?

In his book, There Is Life After Drugs - How Bad Do You Want It?, Pastor Ray Houston tells the story of his past as a single parent battling addiction and his road to starting a Christian ministry in Bloomington, IL. You can read about his inspiring story and book Pastor Houston as a motivational speaker through this website. 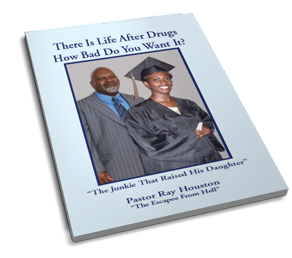 His life was all about the streets. Alcohol, sex, money, and above all, drugs, was what made his life go round. He seemed to be a hopeless case of a lost soul, until he opened his heart to see the rewards of being a single parent, raising his baby daughter even in the midst of dysfunction. Through vivid narration, Pastor Houston chronicles the sour events of his past to bring inspiration to everyone in the future. He was a drug addict for twenty-seven years, but God allowed him to escape jail, dodge death, and not lose custody of his child. His new-found freedom marks his fascinating journey of new life and hope.

From Skid Row to the Federal Building, who would have ever thought that this ex-drug addicted, dysfunctional, Mr. Pookie Ray, the brother from the hood would overcome his addiction and right after 911, a time of extreme scrutiny for the country, be one of the ones allowed to come in to do business as a painting contractor for the FBI. Who would have thought he would continue to do business for the Federal Government, including the office suite of the future President of the United States then Senator Barack Obama. Most paradoxical of all is who would have thought this ex-junkie would ever do work in the Office of the Drug Enforcement Agency. That's funny! This book is a book of hope and encouragement to every person still on drugs and for every person who has a love one still out there. You must know that There Is Life After Drugs - How Bad Do You Want It?